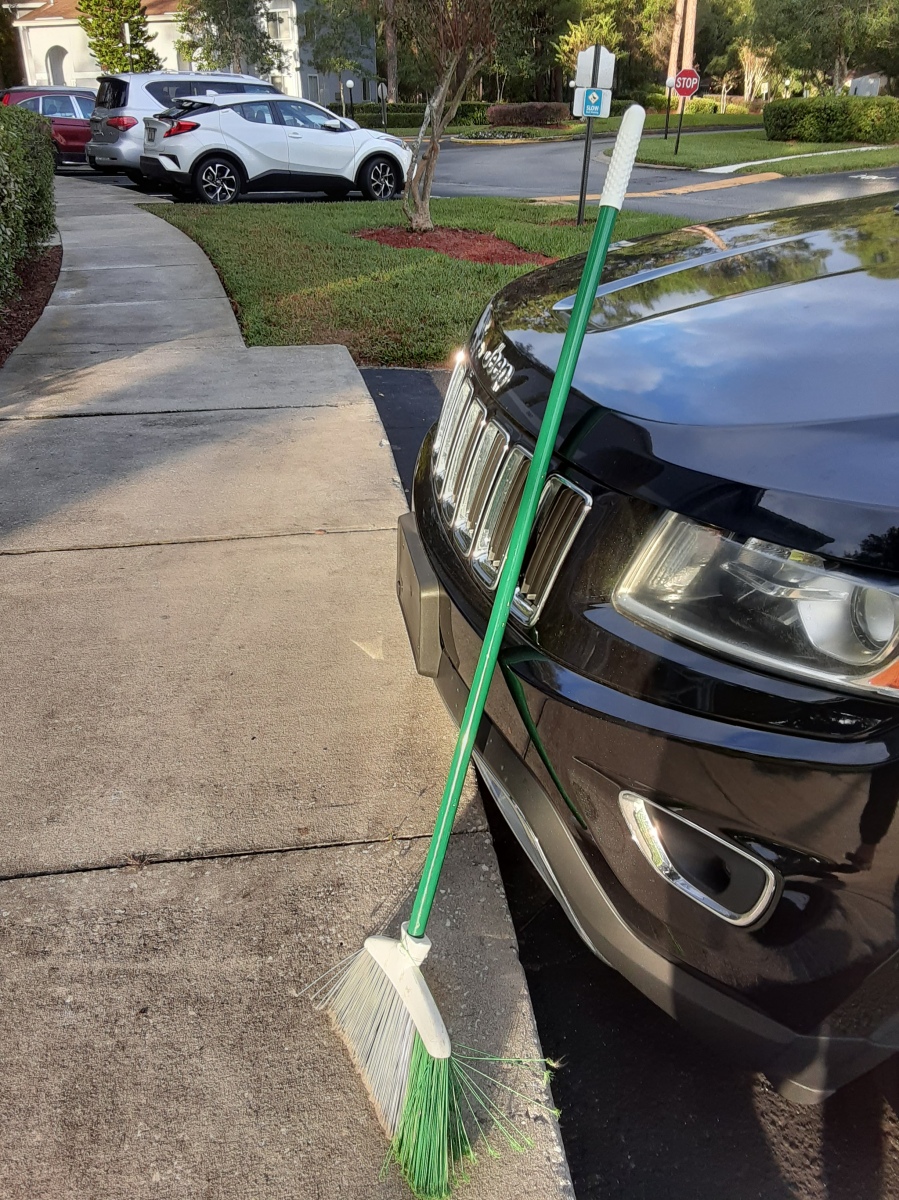 The broom as a ninja weapon

Every morning like clock-work, I feed my little colony of eight stray cats. A vet tech used to live in one of the condo units near mine and many of them were “trap and release neutered” (T&R). The females have an ear clipped, so that if they’re caught again the rescuers and the vet will know they’ve already been spayed. Our condo is also home to wild Muscovy ducks who are very “food aggressive.” So, I bring “the broom” out with me to ward off the ducks. Trust me, the ducks do not like the broom. When I point it or wave it at them slightly, they waddle away as fast as they can. Hilarious.

My neighbors must think I’m a crazy woman. “Did she fly in on it?”

This morning it was 40 degrees out with the wind coming in off the St. John’s River at about 25 miles per hour. That’s cold in Florida. We think water freezes at 40. It does, doesn’t it? The cats were freaked by the wind, and in a feeding frenzy due to the cold. They know they have to eat up an get some fat on them. I feed them breakfast and a woman in a unit two down from mine feeds them dinner. When they sit, they have that plump shape well-fed house cats have…and that makes my heart happy.

We also have two hawks in the area. I live in a city, not a small one either. Yet, my condo is nestled inside of a wooded area and it sits on a natural pond that is fed and emptied by a creek. There are many natural lakes, ponds, and creeks in Florida…not to mention swampland. Floridians who live in major cities know an alligator may not be far away, or a water moccasin. Florida is pristine beaches, shining resort hotels, surfers, and it’s also untameable. Something I love about the state.

Perhaps due to the cold, the two hawks who hunt the forest area near the pond were circling overhead, above my condo unit. Well, of course…there were eight fat cats eating breakfast right there. And it was cold, so why not snatch an easy meal. Except there’s that crazy woman standing there…and now she’s waving “the broom” in the air in a fighting stance.

Oh, what the neighbors must’ve thought. “Well, in Florida you get all types. You know she writes murder mysteries and writers are strange people anyway.” 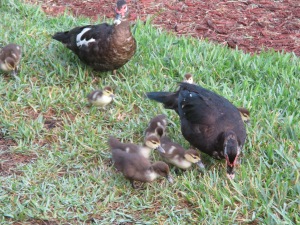 My condo complex is built next to a natural pond with a creek running into and out of it. So, we have ducks. As you approach my building, there is a sign: Slow: Duck Crossing.

So, one of the female ducks had a brood of six, and one of them was teeny, itsy-bitsy. The mom seemed to pick on it. This seems to be so brutal, but these are wild creatures, not tame…and she is a small new mom and may have been very anxious. So, this little one would sorta hide beneath one of his siblings. He touched my heart with such an huge impact that I began seriously praying for his survival. I mean fervently throughout the day. I didn’t see the gaggle for over a week. When I saw next them, this little one had survived the 8 or 9 days or so, and had grown, but was still the micro-duckling of the group. The mom seemed not to be picking on him so much, but he was still attached to the side of his sibling. Wherever the other duckling went, he went. I began think of this little one as he, a generic kind of he. I’ll find out in another month or so what sex he is by his markings.

We also have a colony of stray cats. A vet tech lived in the condo complex before I moved in and she trapped them and had them neutered. Thus, we don’t have kittens…so far. A few of the residents feed the cats and the ducks cat food. Since I knew they were eating cat food, I’d approach the group of ducklings and toss cat food to them, making sure the itsy one got a good portion of the food, but not overly so. Didn’t want him to gorge and become ill. This goes along with my decision to live more intentionally. To do things with purpose and to stick to it. To be mindful.

Well, he’s grown some and I don’t feed them any more because it’s better that they forage for food in the reeds around the pond and in the grass instead of beg for human food or cat food. Actually, the cat food is better for them than the white bread some people feed them. Commercial white bread has no food value for humans or for ducks…but that’s another blog article.

I do chase the males away from this small mom and her brood ~ yeah, intentionally and with purpose on my part. At this time of year the males tussle and it seems to frighten this new mom. We have traffic at the condo complex and it’s best if things are calm when she’s leading her ducklings to and from the pond. Once, after a rainfall, I caught mom and her younguns splashing in a puddle in the middle of the parking lot. Looked like a lot of fun. Still, I took on the role of killjoy and chased them onto the grass and kept chasing them till they were well away from the asphalt. At any rate, I’m happy to report the little guy is growing and doing well.

Meanwhile, at my client’s house on another Florida pond (where because I’m semi-retired but too energetic not to work, I do part-time in-home care) we have another duck scenario going on.

There is a grouping for four ducks at one end of the pond. It seems to be one male and three females. A lone female from the other side of the pond is trying to bring herself and and her fairly large duckling (he’s still got the grayish brown duckling feathers, but he’s about to get his adult feathers) into the group. The adult male in the group of four doesn’t want the large duckling. That’s why I’m thinking this duckling is a male. The mother keeps swimming up to the group and without fail, the large male duck viciously (but with no physical contact) chases the duckling away.

At one point, after one of these chases, the duckling wound up on one side of the pond and his mom was on the other. The duckling frantically rushed back and forth along the bank calling for her. She’s a small, new mom with only one duckling and is no match for the male. So, she made her way slowly around the pond while the duckling cried for her. When she got to him, she led him away to the far end. This went on in duckdom for three days. And each time the male rejected the duckling.

On the fourth day, the mom stopped trying to introduce herself and her duckling into the larger group of ducks. I was so proud of her, she chose her duckling. She set up camp for the two of them at the far end of the pond where they stayed all day. They foraged for food together and they nestled together. At one point she gave me a scare. She began pushing the duckling’s head under water and I thought she was trying to drown him. No, she was showing him how to take a bath in the pond. After pushing his head under a few times, she ducked hers under and when she came up, shook her head and flapped her wings. He immediately imitated her.

Life in the wild can be brutal and scary. I guess that’s why it’s called the wild. Many days when I enter my house, I just have to hug my cats and my little doggie and tell them I love them and that I will protect them. Like that small duck mom who chose her baby over the protection for herself of the group, I choose them. It’s stewardship, yes, and love for all creatures large and small.