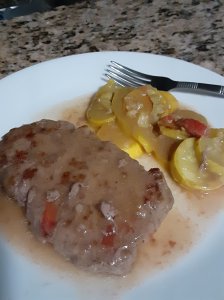 I’ve never had homemade Salisbury Steak before. I’ve selected it in college and hospital cafeterias, but homemade is a totally different culinary experience. The opposite of gummy cafeteria fare, it’s full of flavor. And, it’s easy to make.

I had a pound of organic ground beef and I had yellow squash. So, Salisbury Steak was a logical choice with the squash as a side. I can’t give you recipes because I almost never use them.

The first thing I did, which I often do, is google “easy Salisbury Steak recipes”, then “Salisbury Steak with Brown Gravy recipes”. Basically you need a pound of ground beef, 1/2 C or so of bread crumbs. I didn’t have bread crumbs so I used the oats on hand which wasn’t enough for breakfast. Was it a 1/2 C? I don’t know. I just mooshed it into the meat with minced onion, Worcestershire sauce, 1 egg, salt, pepper, garlic. I had some made-from-scratch savory golden gravy (chicken stock base), and I threw a couple of tablespoons of that in with the meat for added flavor Then you make them into four oblong shaped patties. Sear them on both sides, and pour the rest of the gravy over them in the pan.  I didn’t let them get charred. In a few Youtube demonstrations, they got charred. Up to you. If you’re not experienced, don’t char them the first time. It takes 35 minutes to cook Salisbury Steak. If you’re a beginner, don’t walk away from the stove. Even if you’re not a beginner, don’t walk away from the stove.

I looked online at five or six recipes and a few Youtube demonstrations. One of them said to add diced red pepper. I had jarred roasted pepper, so I threw what I had left, drained, into the meat mixture and mooshed that baby up. Note: Preparing Salisbury Steak is like making meatloaf, except you use 1/2 C bread crumbs or rolled oats instead of bread. No bread in Salisbury Steak, and it has a higher meat content than meatloaf. You also must use Worcestershire sauce. You can cook the patties in jarred beef gravy. I’d add a little water to the jarred stuff when cooking.

Here’s the secret to making Southern Style Yellow (Summer) Squash. You wash and then cut them into rounds. Spray a pan and saute them for a bit. When they sizzle, add water, salt, pepper, some garlic…and simmer them to within an inch of their life. As the water evaporates, add more. Easy Peasy. You can let one or two of them get charred, for visual interest but don’t let them burn.  I add about a 1/2 C of cooking wine. That’s not traditional Southern, so don’t tell anyone. You can cook them for 35 minutes and they’ll be ready to serve with the Salisbury Steak. As with the meat, don’t walk away from the stove.

If you need a recipe, here’s one for Salisbury Steak I think is really easy to follow. It explains the difference between and hamburger patties and Salisbury Steak patties https://www.sixsistersstuff.com/recipe/salisbury-steak.