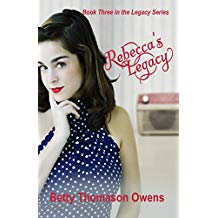 Betty is such an awesome writer, you just have to check out Rebecca’s Legacy, Book 3 Legacy series.

Amy Juliana Emerson might be a cultured debutante, but she’s doing her best to follow her mom’s rebellious footsteps. Her desperate attempt to escape her father’s control, however, comes at the worst possible time.

Robert Emerson has received a threat against his family in an attempt to take over his company, Sanderson Industries. To guarantee his willful daughter’s safety, he sends her to work on a produce farm run by her Aunt Rebecca. Maybe her quiet strength and unconditional love can work on Amy, keep her from becoming the prodigal daughter she seems insistent on being.

Matt Wordsworth is the man Robert calls upon to make sure his daughter stays in line. His only interest in the beautiful girl is purely part of his job. Purely. Amy considers him a fuddy-duddy which suits the situation perfectly, allowing him to stay close to her without concern for her losing her heart to him. And his own heart … well, his feelings didn’t matter. This was business.

Nike:  Tell us something topical, interesting, funny, or something we would not expect about the writing of this novel.

Betty:  Amy Juliana Emerson was born in Amelia’s Legacy, the first book in the Legacy series. I always wanted to tell her story. When her character began to flesh out in my writing, I loved her instantly. She made me laugh. The main antagonist in Rebecca’s Legacy, Thad Greene, was supposed to be a constant thorn in Amy’s side, but something happened as I was writing his character. He ran into a snag that changed the entire plot line and shocked the author. Yes, that’s right, I was surprised. So, now you know I’m not a plotter. I contemplated an adjustment to the story, but honestly, the pivotal scene just felt right.

Nike:  If this novel is part of a series, tell us about the series.

Betty:  The Legacy series begins with Amelia’s Legacy, Nancy Sanderson’s attempt to free herself from her grandmother’s iron-fisted control. In book two, Carlotta’s Legacy, Nancy’s best friend Rebecca Lewis feels compelled to enter into marriage with a man she barely knows, a young Italian count who owns a vineyard in Umbria. The ongoing theme of the Legacy series is discovering love through family.

Nike:  Can you give us a sneak peek or preview into the next work in progress (WIP) you’re working on? When do you expect to release it?

Betty:  I’m working on the final book in the Kinsman Redeemer series. The first book, Annabelle’s Ruth, is a retelling of the Biblical story of Ruth, set in 1950s rural south. I was able to use many of my childhood memories of the setting and actual people (fictionalized, of course) who lived then. Book 2, Sutter’s Landing, continues the story. In the final book, Annabelle (the Naomi character) struggles with her feelings for a man who’s pursuing her. I’m hoping she’ll overcome her objections and accept his proposal, but we’ll see. The working title is “Annabelle’s Beau.” I hope the book will be ready for release in 2019.

Nike:  Were you good in English as a student? Did you enjoy reading and writing back then?

Betty:  English and literature were two of my favorite subjects in school. I read all the time and enjoyed a variety of subjects and authors. My senior year of high school, I was a teacher’s pet—er—aid for my English Lit class. That was when I became interested in the classics. I read books by the Bronte sisters, Dickens, and du Maurier. When it came time to read Les Misérables for class, I was horribly bored. But a couple years later after high school ended, I was even more bored, and picked it up again. Wow. I was hooked. I read it through twice and loved it. I don’t remember writing, except when it was required. The desire to write came on suddenly in my early thirties. I often quip that I started writing to keep my sanity while raising three boys. A friend read one of my early stories and encouraged me to pursue it. I took a short story writing class at the University of Louisville. The professor loved my story and urged me to continue writing.

Betty Thomason Owens is an award-winning writer of historical fiction, contemporary fiction, and fantasy-adventure. She’s an active member of American Christian Fiction Writers (ACFW), where she leads a critique group, and is V.P./Secretary of the Louisville area ACFW group. She’s also a speaker, a mentor assisting other writers, co-founder of a blog dedicated to inspiring writers, and serves on the planning committee for the Kentucky Christian Writers Conference.

Her writing credits include the Legacy Series, and the southern historical Kinsman Redeemer Series (Book 1, ANNABELLE’S RUTH, is a 2015 Grace Award winner, and has recently been translated into Spanish). She has two fantasy-adventure novels, THE LADY OF THE HAVEN and A GATHERING OF EAGLES, in a second edition published by Sign of the Whale BooksTM, an imprint of Olivia Kimbrell PressTM.