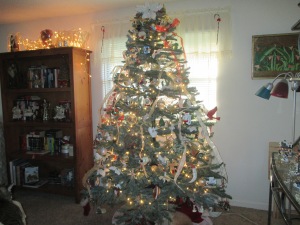 I ‘drug’ my old and once quite expensive fake Christmas tree from Brooklyn to northeastern coastal Florida. Nearly twenty years ago, my husband and I went to one of those upscale Christmas stores AFTER the season and bought one of their larger and fuller display trees. At that time and with the end of season sale it was still over $200.

Joseph is gone, and though I’m still 39 (yeah, right), I’m no spring chicken. Last year, when I hauled the tree out of my shed and put it up in my tiny two-bedroom house in Florida, I swore I’d never do that again! It was too heavy for me to drag in and then at the end of the season drage out. Putting it up and taking it down was too much work. It’s one of those that must be assemebled branch-by-branch. Yet, this year I got it out again and managed to get it up with a ton of whining and murmuring. As some of you might know, I’ve had a rep for having perfected whining to an art form. However, totally through the grace of God, I’ve been able to knock a lot of that nonsense off.

Do all things without grumbling or disputing ~ Philippians 2:14 [NSB]

When I say it’s work to put the tree up, that’s what I mean. The trunk has to be assembled. long the trunk letters Have been printed (A, B, C, D, E, F, G) and they are color coded. The branches also have those letters printed on them in the corresponding color. Twenty years ago, those letters were easy to read, not so much now.

In Brooklyn, we’d assembled a layer of boughs, then layer lights in a cirsle around the tree at that level. We’d continue…a layer of boughs topped by a layer of lights until we reached the top. By the time we were done, we might have three hundred lights on the tree. Of course, there were two or more of us decorating. Now there’s just me. I love decorating. I love everything about Christmas. Decorations are a symbolic tribute to the babe who was born in a manger over 2000 years ago. The many lights abounding in every home, business, and thoroughfare mere representation of the Light that entered the world.

I hope to make another transition in 2018 and enter a new season in my life. I plan to move to an apartment where yard work will be handled by management. I’d like to have a swimming pool for exercise and to keep limber. And so I have caught myself muttering, I’m not going to take that tree. It’s going to Goodwill. Sounds a lot like what I was saying last year. Will the tree go with me? Only time will tell.

6 For unto us a child is born, unto us a son is given: and the government shall be upon his shoulder: and his name shall be called Wonderful, Counsellor, The mighty God, The everlasting Father, The Prince of Peace.7 Of the increase of his government and peace there shall be no end, upon the throne of David, and upon his kingdom, to order it, and to establish it with judgment and with justice from henceforth even for ever. The zeal of the Lord of hosts will perform this. ~ Isaiah 9: 6-7 [KJV] 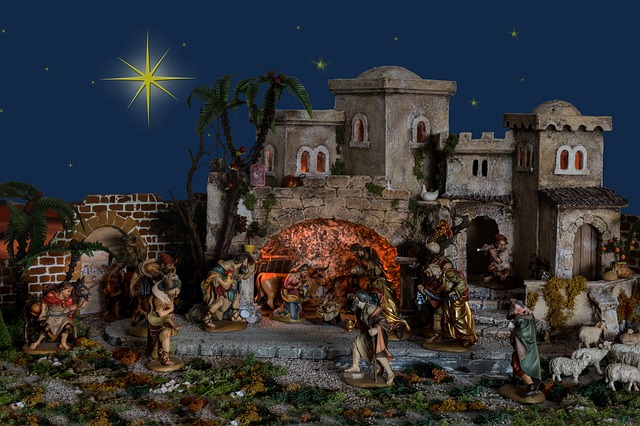