They say Florida is one place where the rule ‘You can’t wear white after Labor Day‘ is null-and-void. In general, attitudes and lifestyle are more relaxed here…and that’s a huge reason why I moved here from The Big Apple. I love the simplicity of the lifestyle in Florida.

This year, after the hot summer months, and debilitating hurricanes, the nip in the air that comes with autumn has been welcome. I couldn’t wait to put away my summery outdoor decorations. Yes, I admit, I had pink flamingoes out all

summer…but only in my backyard near my fire pit. I’m all in for colorful, fanciful, Florida-friendly objects ‘d art in the front, but don’t go wild with pink Flamingoes. Truly, I don’t.

So, I hauled the bin out of my sheld where I store fall decorations. I put up a swag of fall leaves over my front door and some harvesty colorful fake flowers in a small flower pot along with the smiling face of a little girl scarecrow.  My fall decorating is a work in progress and I’ll add a few pumpkins to the stoop. I love scarecrows and I’ll put out the ones I’ve collected over the years in the house.

So, how do Floridians dress for Fall? It’s safe to say, folks add rust, gold, and ruby tones to their wardrobe. But, yes, we still wear shorts, short sleeves or no sleeves, and flip-flops. In fact, flip-flops are the official shoe of Florida.

But seriously, I find simplicity dovetails beautifully with my spiritual life.

2 Corinthians 1:12 [ESV] ~ For our boast is this, the testimony of our conscience, that we behaved in the world with simplicity and godly sincerity, not by earthly wisdom but by the grace of God, and supremely so toward you. 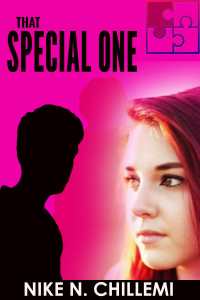 What on earth has my new release, THAT SPECIAL ONE, got to do with Hurricane Irma and brownies. Read on and find out…

Last week, with Hurrican Irma bearing down on Miami at something between a category 4 & 5, I sat at my laptop furiously trying to finish final editis before the storm reached Jacksonville. It was a race against time, trying to get my first attempt at a New Adult novella published on Amazon (downloaded) before JEA ran into serious service problems.

Alas, due to the high volumne of downed trees and flooding, the power went out in nearly all of Jacksonville. My next door neighbor was kind enough to run an extension chord from his generator to my refrigerator. That still meant, no lights, no a/c, no TV or audio system, no Wi-Fi, and manual toilet flushing for three days as the temperatures climbed (is that too much info?).

After three days, the power did come back on. I think I must’ve looked and felt much like Jonah had after three days in the belly of the great fish. The upside was, I was able to continue with edits offline…but, still no Wi-Fi. I couldn’t download the novella to Amazon. Finally, the Wi-Fi came back on and I was able to launch THAT SPECIAL ONE.

Where do the brownies come in? I made a batch for my very kind next door neighbor who shared electricity from his generator with me. When I handed him the plate full of brownies, he broke out into a huge smile and said, “I’ll have to pour a glass of milk.”

THAT SPECIAL ONE in a nut shell…

College freshman Ivy Chalmers moved in with her aunt and uncle in Arroyo, Texas. She needed to get away from her alcoholic and weed smoking mother.  Ivy longed for a different life than the revolving-door-men in her mom’s life. Making a one-eighty, she vowed not to make a serious dating commitment unless she knew it would be that really ‘special relationship ‘.

Corey Jones had been the man in his house since age twelve, when his alcoholic dad abandoned him and his mom. Once in a while, his dad showed up trying to extort money from them using threats. Then his blue-haired, self-centered cousin Ava came to live with them and the way she treats his mom enrages him.

Ivy is thrilled when she meets an upper classman from a neighboring college and thinks he might be ‘that guy.’ When she is horribly betrayed, her world is thrown upside-down, and she plunges into a depression.  In a steady and kind of clumsy way, Corey is there for her during her worst moments. But his family is plagued with alcoholism, the life she had with her mom, the life she ran away from. What’s wrong with her that she attracts the wrong guys? As if that weren’t bad enough, there’s an arsonist terrorizing their tiny village.

One and a half years ago, I moved lock stock and pets to Florida from Brooklyn (NYC). I’d lived in the rush, rush, rush of Gotham for over 33 years and was more than tired of it.

I love the Atlantic Ocean and crave being near it. I’d lived in Miami for 2 years, but that was before my marriage to a guy from Brooklyn. Even in Brooklyn, we lived in the Marine Park neighborhood which is only a few miles from the ocean. On days when the wind blew from east-to-west, we could smell the briny, salt air. Loved that. But didn’t love the rush, the mania, the grit in the air that comes along with living in the Big Apple.

NE Florida immediately brought serenity, and I craved that after 33 years of a city in constant animation, always busy. Slowly I got rid of my all-black wardrobe (the NYC uniform) and relaxed into what I call a pulled-together beach-bum style.

Hurricane Irma is now 2 – 3 days from its approach to northeast Florida and I went to with my doctor’s referral to get blood drawn this morning. I guess, that qualifies me as a true Floridian. Afterward, on the way home, I so looked forward to a cup of hot coffee. As I drove, I prayed for the houses on my right and left, that angels would protect them from the storm. I prayed for the broader community. Prayer is definitely part of ‘the simple life’ I lead here in Fla.

Yes, I’m preparing. All Floridians are. In my house, preparations are intentionally simple. Simplicity doesn’t mean complacency. Today I’m making sure my freezer is full of ice so that if the power goes out, whatever is in there will keep. I shopped yesterday and didn’t buy anything frozen. Today and tomorrow I’m eating what needs to be cooked. Following a phoned-in tip I heard on the radio from a survivalist, I filled up small plastic containers with water nearly to the top and froze them. This will help keep my entire refrigerator cold (milk, veggies, cold cuts, etc.) if there’s no power long-term. As the water defrosts it can be used to brush teeth, etc.

There is order to simplicity and calm. Am I always calm? No! In the past, I made whining and complaining into an art form. God’s worked a lot on me in that area. I’m also a ‘Plan A, Plan B, Plan C’ type person. I do keep my plans simple. However, I like to know not only what the plan is,  but what the alternate plans are. I’ve learned, however, the Ultimate Plan is God’s plan.

I continue to pray for all those in the path of Hurricane Irma, now considered the biggest and most ferocious storm ever recorded in the Atlantic Ocean.

Isaiah 4:6 [NASB] ~  There will be a shelter to give shade from the heat by day, and refuge and [a]protection from the storm and the rain.

Forgiveness is not some passive feeling that wafts up on us once in a while. Well, not the God kind of forgiveness. Forgiveness is a dynamic action of the heart that believers often must will to do. We do it on purpose even when our flesh cries out, “they don’t deserve it.” And maybe they don’t. If I want to be free of the pain, hurt, and the weight of it, I’ll forgive and let it go. Then I can walk with a lighter step, feel real happiness and joy.

Purposeful forgiveness doesn’t mean we allow toxic people to continue to injure us. No! We’re not doormats. We must be wise as serpents and take actions using wisdom to protect ourselves. However, we do not allow ourselves to become as toxic in the situation as the the other injurious individual(s).

And, I’m not going to whine or complain to anyone about these situations either. Those who know me, can attest that at times I’ve taken whining and complaining to an art form. I’m not going to phone anyone complaining about all this forgiveness stuff and how hard it is. If I want to whine and complain about it, I’ll go to God. He’ll shut that down. He’ll remind me, I’m not forgiving on myown inner strength and fortitude, but on Christ’s strength and fortitude that’s within me.

Colossians 1:27 [NASB] ~ to whom God willed to make known what is the riches of the glory of this mystery among the Gentiles, which is Christ in you, the hope of glory.

Philippians 4:13 [NASB] ~ I can do all things through Him who strengthens me.