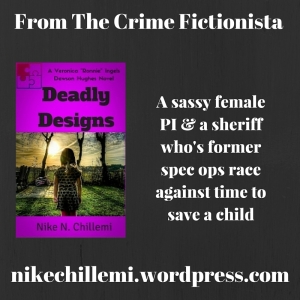 The kids are back in school, so kick back and enjoy a taut, suspenseful detective novel ~ Friday, September 9th – Sunday, September 11th only 99 cents.

DEADLY DESIGNS: Fast paced whodunit, with dry humor. Sweet, romance, warm intimacy, sophisticated themes presented tastefully.  Private investigator Veronica “Ronnie” Ingels teams up with Deputy Dawson Hughes to find a geeky radio broadcaster’s missing wife and young daughter. They fear the woman and child were taken by Islamic terrorists as revenge against the husband’s pro-Israel, conspiracy theory broadcasts. The investigation takes Ronnie and Hughes from a manicured Connecticut estate, to interviews with an elitist A-List society crowd, and run-ins with cranky local police detectives. Then they plunge deep into the seamy, drug-riddled underbelly of the fashion world, with the specter of international terrorism hovering.

Hughes has recently been promoted to lieutenant in the Taylor County, Texas Sheriff’s Department. He’s on leave on a special assignment with Authorized Operations (AO), a clandestine, quasi-government agency operating out of a sea-side mansion in Hither Hills, NY. The only thing is, many powerful politicians, and government big-wigs claim Authorized Operations doesn’t exist.

Ronnie is furious at both Hughes and the broadcaster for waiting thirty-six hours to start the search. She knows the longer it takes, the less chance there is of finding the child alive. The problem is, radio talk-show host Ed Harper has been hoping-against-hope that his pot-smoking, model wife is on one of her ‘esoteric experiences’ and has simply taken the child while she romps for a few days. He doesn’t want to seriously consider the other, more hazardous possibility… that his radio broadcasts have angered some very dangerous people.

While I thoroughly enjoyed, HARMFUL INTENT, I found DEADLY DESIGN’s captivating plot and familiar characters fascinating. It’s so refreshing to read a good suspense novel without all the darkness but that is still exciting. Amid the turmoil, Ronnie and Dawson ease into a romance that is fresh and utterly real. I highly recommend DEADLY DESIGN. It’s a stellar read. ~~ V. B. Tenery, author of WORKS OF DARKNESS, book one in the Matt Foley/Sara Bradford series.

…as Hughes and Ronnie come under threats to their lives, the author constructs a narrative of increasing tension that builds to an exciting climax and satisfying denouement. The author also presents a meticulously researched variety of technical equipment. The result is an excellent suspense novel that readers will find most entertaining. ~~ Don Taylor, author of LIGHTNING ON A QUIET NIGHT, THE LAZARUS FILE, and more.

In DEADLY DESIGNS, Dawson Hughes brings his Texas charm to the Tri-State area to work with Ronnie on an abduction case. This gritty, suspense-filled story will keep the reader on edge all the way up until the satisfying end. I especially enjoyed the blossoming affection between the two detectives. Highly recommended! ~~ Betty Thomason Owens, author of ANNABELLE’S RUTH, Book 1 in the Kinsman Redeemer series.