I took a step outside my front door this morning with my trusty gal-pal Sophie, and these words sounded loud and clear inside my head: The Lord is my shepherd, I shall not want. I’m facing a particular trial at this time to which these words apply. Let’s see, it’s Thursday, and I’ve got Thursday’s trial. It seems to go that way, doesn’t it.

Anyway, I began to say those words of Scripture from Psalm 23 aloud as Sophie and I walked along, so she could do her business. I must’ve repeated them aloud 35 or so times. You see, I believe the Word of the Lord is powerful and does not return void. These were the “words” He gave me this morning and I wanted to verbally release them into the atmosphere of my life.

When Sophie and I returned to the house, I felt like maybe the Holy Spirit was suggesting I read Psalm 23. Then I did that funny thing Christians do. “What if it wasn’t the Spirit? What if it was just me?” And I had to laugh at how we are. In this case, even if I “missed it,” reading the psalm was a good thing. So, I opened my Bible. 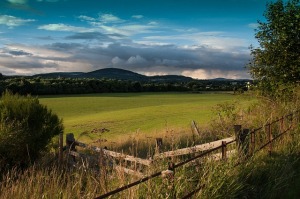 And the next line hit me as something fresh. It was the Spirit prompting me to read it. He makes me lie down in green pastures. I’ve always seen that line as wonderful poetry emanating from the mind of God through David, lyrical in its beauty, bucolic.

This time I saw the strong arm of God. I’d never seen that before in this line. I had to take another look, and another. It actually says, he makes me lie down, makes me do it. I checked several translations and they all say, makes me. Has a parent or a highly respected dear friend ever said in a tone that brokered no argument, “Go lay down and rest!”? That’s the kind of makes me I saw in this line for the first time today. The Lord can spiritually hit believers right between the eyes and say, “Rest!”.

The Lord’s mind is so all encompassing it’s amazing (in the true sense of the word ‘amazing’), and he can be a bit sneaky too in His intimate relationship with his children, marvelously sneaky. Want to know what I’ve been studying this week? Well, I’ll tell you.

Resting in the finished work of Jesus. ~ The battle is the Lord’s, so let Him fight it.

Of course that implies I’ve been doing all the things God’s been leading me to do in the natural world. Having done all that, I’m to give the battle over to Him. He’s got a much longer arm than I’ve got.

6 thoughts on “Oy, Another Trial ~ and I’ve been acting like an over-tired baby”