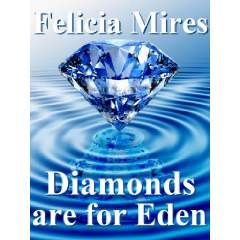 The author thrusts the reader into a whirlwind of spies and assassins, all the while delivering a well written romantc suspense novel. Personally, I like my terrorists horrific and frightening as all get out, while the hero and heroine and totally focused on and consumed by the chase. That’s simply my espionage thriller preference and doesn’t at all detract from this writer’s ability to deliver a suspenseful romance.

Natasha Kelly owns a courier service for museums with her African born brother Katir, adopted by her parents when they were missionairies. She has been engaged by the Mossad, Israel’s spy organization, to transport uncut diamonds from South Africa to Israel. However, terrorists are trying to stop all diamond shipments from reaching Israel. Natasha not only has to get the diamonds to Israel, she also has to find out who the terrorists, are and why they’ve targeted South African diamonds.

Brithis screen heartthrob Dirk Sloan happens to sit across the aisle from Natasha on her flight to South Africa. He is also staying at her hotel, and appears out of nowhere to stop an attack upon her in a dark alleyway. At that point he gives her a kiss and she has to wonder if he’s playing foot-loose-and-fancy-free with her. She’s beginning to have an attraction to him she is fighting. He seems to be able to find her at any moment. He could be working with the terrorists seeking to stop her.

David Benjamin, career Mossad agent, has feelings for Natasha. So does Dirk Sloan, and there you have the classic romance novel love-triangle. Natasha is attacked in the middle of the night at a Mossad camp in the desert. The upshot is the two men take turns sleeping on her couch to protect her. Later Natasha and Dirk travel by camel to a desert Christian abbey where they must rescue monks who have been taken hostage by the same  terrorists who have been intercepting the diamonds. This romantic suspense novel has twists and turns, action, plenty of sizzle, with a deep faith element. The story continues in the next novel of the series.