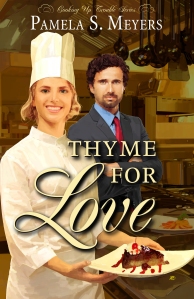 Things move so rapidly in fiction publishing, it’s hard to keep up with authors. That’s why I’m so glad to have Pamela S. Meyers as a guest today. Let’s get to the interview and find out what’s been happening in her life.

Nike:  Like you, Pamela, I started out with a publishing company and then independently published. Tell us about that journey.

Pamela:  My first two published books were with a small press. Last January, at my request, I received back my rights and began the process of publishing THYME FOR LOVE, the first of the two books. Going indie has been a new experience, but I am finding it fun and not near as daunting as I thought it would be. I plan to start editing the second book very soon, LOVE WILL FIND A WAY, which is a sequel and get that one released.

I do have another book LOVE FINDS YOU IN LAKE GENEVA, WISCONSIN, which was published by Guideposts/Summerside in 2013 and that is still available on line. This was the book of my heart because I was so blessed to write a story set in 1933 in my hometown. I came to appreciate my roots much more than ever before through the research and learning things about my town I never knew before. I don’t live there now, but am blessed to only be about an hour’s drive away.

Nike: All of my novels have foodie sub-themes. I just love mysteries with a culinary twist. Tell us how you got the idea for THYME FOR LOVE and how you developed it?

Pamela:  I wrote the first draft of the story over six years ago. I love cozy mysteries and wanted to target a new cozy line that also wanted romance woven in to the story. I already knew I wanted the story set in an old mansion on a fictional lake close to my hometown. And I wanted her to be a chef. I brainstormed the plot with an author who had written mysteries and she helped me come up with the idea of my heroine working for a nonprofit organization that is housed in the mansion and she would take a daily snack cart around to the employees, many of them with unique personalities. She also helped me with red herrings and other things.

Nike:  What are the things you like most about your heroine?

Pamela:  My character April Love has the same sense of humor I do and I like that she’s spunky and determined. I also like that she’s also vulnerable and that she grows in her faith in God as she works through dealing with suddenly having her ex-fiancé in her life and him being framed for murder. I’m not giving away a spoiler. That’s on the back of the book LOL.

Nike:  Now for personal questions…what were you like in school. Tell us one of your fave school memories? BTW, were you good in English?

Pamela:  I was very sociable in school. In other words—chatty. LOL. I made okay grades, but did not make the honor role. After high school I went on to a state college, but I needed to grow up a bit before going to college. I had a great time there on the weekends, but I found myself back home the next year and working as a bank teller. I learned typing and other office focused skills and worked as a secretary, which later became administrative assistant. I finally returned to college some 20 years later and enrolled in a fast-track adult program. I actually got all A’s and discovered my ability and desire to write while there. I graduated in 1994. My mom wasn’t alive to see it, but my dad was. It was thrilling to see him beaming. He died four years later, right after my first paid article came out in Today’s Christian Woman Magazine. I didn’t think I did that well in English, but when I looked at the graduation program my major in communication was there and so was a minor in English. I guess all the writing classes I took were enough for me to qualify for that. I laughed about it.

Nike:  Which famous person, living or dead would you like to meet and why?

Pamela:  Of course I would love to meet Jesus in person, and I know I will when I go to heaven. Other than Him, I’d like to meet Amy Carmichael, the missionary to India during the late 19th Century. I love her writings. She was bedridden after an accident for the rest of her life and God used her beyond her years on earth through her writings. She is so insightful and so full of the Spirit and blessed that way. I’d love to sit at her bedside and soak in her wisdom.

A native of Lake Geneva, Wisconsin, author Pamela S. Meyers lives in suburban Chicago with her two rescue cats. Her novels include Thyme for Love, and Love Will Find a Way, contemporary romantic mysteries, and her 1933 historical romance, Love Finds You in Lake Geneva, Wisconsin. When she isn’t at her laptop writing her latest novel, she can often be found nosing around Wisconsin and other midwestern spots for new story ideas.  http://www.pamelasmeyers.com