I took this photo while I was doing research for a novel that is a bit of a departure from the 1940s historical mysteries I’ve been writing. I have a contemporary whodunit coming out this spring. HARMFUL INTENT is a detective story with realistic police procedure and tons of humor. There are more than enough quirky characters in this story. The conversations swirling around this stable prompted me to write the excerpt below. 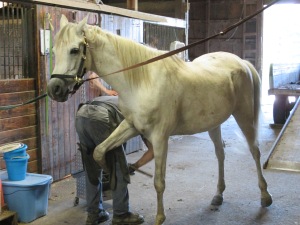 I waved Patti down, got a check, and paid with a credit card. After one last sip of coffee, I grinned at Ronnie over my cup. “It might interest you to know I’ve got somethin’ up my sleeve this mornin’. Today happens to be the day of the Buffalo Gap Cross-Country Trail Competition. It’s sort of an endurance test for horse and rider. If we hurry we’ll see a few of them cross the finish line.”

She grinned. “Wouldn’t want to miss this.”

I ushered her out and guided her toward my Ram. “Why don’t you leave that baby buggy here and ride with me, then I’ll bring you back later?”

I drove down side streets, just beyond the edge of the village, and found parking in a field turned into a makeshift lot for the event. Then we walked an eighth of a mile down a dusty road to the Bar None Stable, a low whitewashed rectangular structure with a huge red and white sliding door in front. It was the starting and finish line for this competition.

Horse trailers pulled by SUVs and pickups dotted the parking area in front as well as the small knoll sloping down to paddocks where several horses grazed.

Desmond LeBlanc greeted us, looking every bit the surfer dude. Matthew McConaughey had nothing on him. LeBlanc’s baritone carried on the breeze. Todd and I went way back to Iraq with the man. Fifty something, but didn’t look a day over forty-five. After a distinguished military career, he grew out his dirty blond hair and spent some time in Hollywood as a stunt double, then transplanted to Texas and opened the stable.

He planted a hand on his hip. “Look who’s deemed to grace us and brought a fine young lady with him. You know something, Hughes, she’s way outta your league.” He slapped me on the back while a wicked grin ate his unlined face.

The thought struck me he might’ve gone under the knife when he was in tinsel town. Might’ve tinted his hair too. Not a speck of gray.

I made introductions. “Ronnie, when Todd and I first got over to Iraq, we had to take crap from this guy. He was a sergeant without mercy and hasn’t let up since.”

LeBlanc kicked a rock in the parking lot with the toe of his dusty boot. “Well, it’s been awhile since Iraq.”

LeBlanc chuckled. “You know him pretty good too. Pete, the rodeo clown.”

Ronnie broke out into a smile. “Pete won?”

“Yes, ma’am. A lotta ladies rode in the competition today. It came down to Pete and Janie West, the champion barrel racer. They were neck ‘n neck when they came outta those trees ‘n into the clearing. Pete showed her no quarter and crossed that finish line in a break-neck gallop. That was something to see, all right. I got it on video. Show you later, if you want.”

A silver haired lady entered the clearing, spurred her mount and rode across the finish line at a trot. LeBlanc excused himself and helped the woman dismount.

I nudged Ronnie. “Let’s go into the stable and see if we can find Pete. They’ll have a farrier in there takin’ care of any shoe or hoof problems. Some’ll be hosin’ off their horses out back.”

Riders who rented stalls, carried pitchforks laden with fresh hay for their horses to nibble.

As we continued walking toward the back, we heard LeBlanc call out, “The last rider has crossed the line.”

A cowboy, with burnished tones in his brown hair, darted into the stable, took his Stetson off, and bowed as a woman rider entered. “Ava Chandler congratulations on finishin’ third from the bottom. ‘Course my wife finished right after you and right before that girl who fell off and her horse run away.” He slapped his hat on his thigh and cackled.

I wheeled around and Ronnie pivoted with me.

Ava Chandler dismounted an outstanding Arabian mare. “Gus, I suppose that passes for humor in your book?”

Gus balanced his hat on the back of his head and splayed both palms out, facing the Chandler woman. “Now, there were no insult intended.”

She stared him down. “None taken.” It seemed she hardly moved her lips.

The man’s shoulders slumped at her rebuke. He rocked from boot-to-boot as he made his way out of the stable.

“Deputy Hughes, are you followin’ me? That would be a violation of my rights and my husband won’t like that.” Her glare had not softened.

I approached her, Ronnie at my side. “Mrs. Chandler, good day. We came to see what Desmond LeBlanc had goin’ on here today. Had no idea you were competin’. This is a public place. There’s no expectation of privacy.”

Her auburn hair sailed over her shoulder as she spun on her heel and stormed away, pulling her horse by the reins, none too gentle on the mare’s mouth.

I leaned over and whispered to Ronnie. “She’s just this side of a loose cannon. That woman bears watchin’. Winslow Chandler isn’t the type to make too many mistakes, but his lovely wife might make a few. Would be nice if we had eyes and ears there to catch her when she does.”

At his time I’m enthusiastically awaiting my cover. The talented Ellen Sallas (Ellen C. Maze) is presently working on it.  She’s a very talented gal.