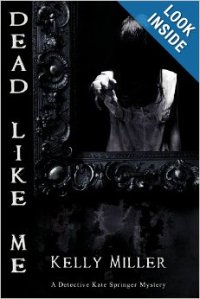 The sexual abuse of a pedophile, in my opinion, is akin to premeditated, attempted murder. It destroys the core being of it’s victim(s).

Detective Kate Springer and her partner, Detective Patrick Jessup arrive at a murder investigation crime scene where a young teenager’s body is partly covered with leaves and twigs. When Kate gets a closer look at the girl’s face, her world is shaken. The face is a dead ringer for Kate’s own face at age thirteen, except that the victim has dyed black hair. The girl had been strangled with bare hands, indicating a perpetrator with some physical strength.

So, either the resemblance is a total coincidence, a product of an over active imagination, or the victim is somehow connected to Kate. This is not your ordinary detective, hunt ’em down, murder mystery. It only took a few pages for me to “get” who Kate is…to understand how the demons from her own childhood sexual abuse impact her ability to handle this case. Her emotional trauma causes her to withhold this identity-connection from her partner and her superiors. In the beginning she even wonders if she harbors such intense repressed feelings from her own abuse that she’s projected her own childhood image onto Kimberly Callahan, the dead teenager. Something, that in fact, is entirely possible.

However, when she interviews Kimberly Callahan’s tipsy mother, who reeks of alcohol, Kate examines a recent photograph of the girl and again notes how similar Kimberly is in appearance to her own childhood self.

Kate uses sarcasm as a means of communication, no doubt because her emotions have been shut down for a long time. She has just finished therapy with the department psychologist after a two week mandatory leave, and this case sends her running back for additional therapy. She is tough and is a survivor, but her past clouds her judgement and she makes more than one questionable professional decision. Of course, that only adds to the novels twists and turns.

We are introduced to a villain who is beyond creepy. As the novel nears its end, there are a few graphic details where Kate recalls her own sexual abuse. Graphic, yes. Exploitative or gratuitous, not at all. These details are organic to the story as Kate comes to grips with her abuse at the hands of a virulent and murderous pedophile.

2 thoughts on “DEAD LIKE ME by Kelly Miller ~ a review, Scary Childhood Memories”