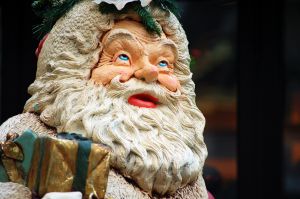 Well, when the Dutch settled in what is now the greater New York metropolitan area waaay back in the early 1600s and called the town New Amsterdam, they brought the idea of St. Nicholas with them. They called him Sinterklaus. He was a saintly old gent who left bits of candy and small toys in the children’s wooden shoes or stockings on November 6th, St. Nicholas Day. They also imported the notion that Christmas was to be a child centered holiday.

Many of the Hessian soldiers who were surprised when George Washington’s motley crew crossed the Delaware River in a dense fog on Christmas Eve  in 1777 decided to stay in America after the war. They brought the colonies the decorated Christmas tree. By the 1800s Christmas trees were growing in popularity in the Tri-State area and beyond. By the mid-1800s there are stories of Christmas trees in Massachusetts and Ohio. By 1855, the Times-Picayune in New Orleans reported a decorated tree in St. Paul’s Episcopal Church and explained that it was a German custom that was catching on. But it all started in New York.

Alexander Turney. Stewart, a merchant who was about as New York as you can get and who had the largest dry goods store in the world on Broadway and Chambers street, began decorating his stores at Christmas and pushing the idea of giving gifts to the entire family. In the 1800s and early 1900s Christmas gift giving was a much simpler affair than it is today. Typical gifts for the ladies were: a dressy pair of gloves, a hair ribbon, a comb and/or brush, a length of fabric or lace. Men also received gloves, as well as scarves, perhaps a tool for his tool box. Children received small toys, bits of candy, gloves, scarves, hats, alphabet inscribed wooden blocks, and the like. 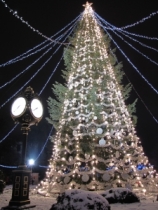 1907 saw the first public Christmas tree celebration in Madison Square. It was a 7o foot high pine hauled in from the Adirondaks and lit up by the Edison Company. That New York tradition quickly caught on with villages and towns across America erecting a tree in their town square. Today New York lights a magnificent tree every year in Rockerfeller Center.

When the country was on the brink of the second world war, New Yorker Iving Berlin wrote what stands as the most popular Christmas tune of all time, “White Christmas. The second most popular song of all time was written in In 1949…you got it, one of the writers was from Gotham. Robert May and his brother-in-law, composer Johnny Marks, imortalied a red-nosed reindeer in their song rejected by his reindeer-friends, “Rudolph the Red Nosed Reindeer.”

In 1947, Miracle on 34th Strreet starring Maureen O’Hara and John Payne was about a store Santa at Macy’s who might just be the real Santa. Elf, the movie was filmed largely in NYC in 2003. Home Alone II, staring the young Mcaulay Culkin was filmed in Gotham in 1992. These and many other Christmas movies with a New York theme have been enjoyed by folks across the country and the world.

I would never want to imply all across the fruited plain they’re stealing Christmas ideas and traditions from Gotham…no never! Just sayin…

4 thoughts on “Did Gotham Invent the Modern Celebration of Christmas? …Or Christmas New York Style”