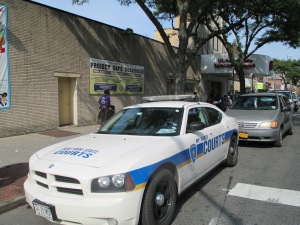 The sign on the church building behind the NYC Courts’ vehicle says:  Safe Surrender Program

I’ve had my eye on a particular kid for a while. She can be rather charming at times, especially if it might get her something. She has been known to be helpful, even sensitive to others. But that’s not what grabs my attention. What pulls my character locator toward her is that most of the time she’s totally self-centered and has a dangerously myopic view of life and the world. That’s true of most teens, but she’s perfected the art form.

Of course, when crafting a character based upon someone from real life, I change quite a few details. Hair color, age, height, gender. So, while observing a rebellious female minor child, I might be creating a male nineteen year old with the same psychological profile. Or I might be creating an 18 year old female character who bears no physical resemblance.

So, when this young lady’s father mentioned he had received a letter from St. Augustine’s Episcopal Church which had “avoid arrest” stamped on the outside, I became intrigued. Dad explained the letter outlined the NYPD’s Safe Surrender Program, which while not an amnesty program, still does provide those who show up and face the misdemeanor charges against them some due consideration in sentencing. His daughter denied getting a summons. She became belligerent, claiming the letter was bogus. She contended the church had no authority over her anyway. Her dad explained to her the program was run by the New York City Police Department. At that point she left the table. The dad felt legally and ethically he had to go answer the summons whether his daughter went or not. Naturally, I made myself available to go as moral support.

I wanted to find out what this was all about. And frankly, I wanted to see if I could ever use something like this in a prospective story.

The Safe Surrender Program was held at St. Augustine’s Episcopal Church at 4301 Avenue D, Brooklyn, NY. The Rev. Cn Dr. Howard K. Williams is the pastor. The church motto is, “To restore all people to unity with God and each other in Christ.” It was held in collaboration with the Brooklyn District Attorney’s Office, the Office of Court Administration, the New York City Police Department, and the Legal Aid Society. Residents of Brooklyn who had outstanding summonses and/or warrants had the opportunity to come to the church and peacefully resolve those legal issues on Friday, August 16 and Saturday, August 17, 2013. Those who participated were given legal representation by attorneys from the Legal Aid Society or the Metropolitan Black Bar. Volunteers from the Brooklyn clergy community were on site to offer support and to offer resources that previously might not have been available. Police were on the street outside the church, but there wasn’t much of a police presence inside the sanctuary itself.

As soon as I arrived at the church with the “Dad”, he produced the letter and was asked for identification and he was given a purple wristband. I was told that once inside only he could represent his daughter and that I’d have to sit on one side of the sanctuary reserved for family and friends. We walked in and he was ushered into a closed off area at the back of the church to complete paperwork. I was ushered by an elderly church gentleman to a seat in the pews to the right side of the center aisle. A woman standing in the front with a microphone sang gospel songs.

After completing the necessary paperwork, he was ushered to the other side of the sanctuary where those with outstanding summonses or warrants sat. I estimated there were about one hundred and fifty individuals, the vast majority men, mostly black or Hispanic. These were not hardened criminals, but were individuals who had received misdemeanor tickets.  Everything was calm and going along in an orderly fashion. Except there was a fifty-something gentleman who was obviously inebriated. I could only wonder if his summons had been for consumption of alcohol in public.  With nothing much to do, I picked up a flier that said: No More Worry, No More Waiting. It listed some of the offenses that would be handled that day.

We sat there over five hours. The singer who was actually more of a mistress of ceremonies tried to keep everyone’s spirits up. She mentioned she also sang rhythm and blues in a club in Downtown Brooklyn and launched into a couple of tunes by Smokey Robinson and the Miracles. After that we were given a pep-talk and a short, and extremely sweet moral lesson by a rabbit hand puppet named Natasha. Quite an accomplished teenage girls’ liturgical dance team performed two numbers to contemporary Christian music.

This seemed to me to be a very worthwhile community based program. The mistress of ceremonies told us it would be repeated in the fall at another church, that one in downtown Brooklyn. I was only sad that the young lady in question had not taken the opportunity to settle her outstanding legal issues. The woman judge the dad stood before was not pleased that the girl had not shown up. The judge would have dismissed all charges, but instead gave the girl another court date in September. Naturally, I indulged in a bittersweet moment of self-interest. I can do quite a lot with an irresponsible character like this in one of my upcoming novels…only the consequences for the young lady or young man (whatever gender I chose to make the character), might not have such a peaceful end result. I write murder mysteries after all. 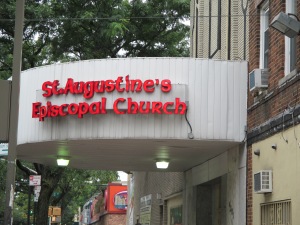