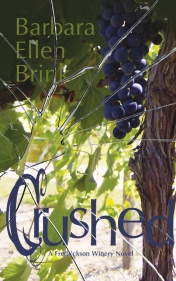 My dad was a wine aficionado. I grew up with a still in the basement of our home in upstate New York on which he made his dandelion wine. He and his friends Stanley Kaminski and Eugen Chamberlain would gather at one another’s houses about every other month for wine tastings. They were very dignified about it. I quickly learned as a girl that when my dad spoke of “legs” he was not taking a covert peek at some sweet young thing, he referred to the way the wine clung to the inside of the glass.

I’m convinced our Lord appreciated wine, perhaps this is one of many reasons why I’ve been so excited about Barbara Ellen Brink’s murder mystery series set in California wine country…so much so that I had to get the first book in the series a for my to read list, ENTANGLED.

I’m equally interested in the second novel in the series CRUSHED…and felt compelled to ask Barbara a few questions about CRUSHED.

Nike:  Readers say your characters are so well defined. What gives us the feeling we could actually know Margaret and Adam….put flesh on their bones, so to speak?

Barbara:  I think readers relate to Margaret and Adam because they’re real. They aren’t perfect, cardboard cutouts in a fairytale world. They have regrets, make bad choices, sometimes say the wrong thing or jump to conclusions and get angry. Margaret’s been a single mom since she was sixteen and struggles with being there for her son but desiring a life apart from motherhood. Adam is fresh out of college and never had a real responsibility, but sees something in this young woman that is so refreshing that he pursues her in spite of her initial standoffishness.

Nike:  You like to use humor. How does comic relief play it’s role in this story?

Barbara:  There are some dark moments and a couple of very creepy characters in Crushed, but throughout the story there’s always a connection of family and friends working together – and as anyone with siblings knows – family means teasing. Adam and his sister Billie tend to banter back and forth but I’ve always felt the winery’s office secretary, Sally, is the queen of fun. She has a quick tongue and wit about her that always lightens the mood around the winery.

Nike:  As I mentioned earlier, my dad was an at home, amateur wine maker. Barb, what is your fascination with wine?

I didn’t grow up with a still in the basement, but we did harvest and sell wine grapes from our fruit farm in Washington State when I was a kid. Vineyards weren’t as prevalent in Washington back then, but now the state’s wine production is second only to California. Even here in Minnesota we have dozens of vineyards and wineries.

In my research I found the whole winemaking process to be quite fascinating. If you ever get a chance to visit a winery and tour their facilities, it’s worth a stop, whether you enjoy wine or not. The wine trend in America has been strong for a dozen years or so now and doesn’t seem to be fading anytime soon. Wine is viewed as mysterious; it has a mystique of its own. With that in mind, the Fredrickson winery seemed like a good setting for murder and mayhem. Wine definitely pairs well with mystery and suspense.

Creating the perfect wine can sometimes be murder…

When Adam Fredrickson shows up at his sister’s California winery, footloose and carefree, looking for a temporary job and a chance to play his music, he doesn’t expect to find the winery struggling financially, or that the girl next door might just be the girl of his dreams.

Margaret Parker, a single mom, newly hired as chief winemaker at Fredrickson’s, finds her simple world put to the test when her father is unexpectedly released from prison, and the man who got her pregnant at fifteen, shows up from Italy wanting to play daddy nine years too late.

It’s crush time at Fredrickson Winery and everyone is working feverously to get the grapes in and ensure a great vintage. No one expects murder to be part of the joyous harvest season.

She opened the door, her eyes slanted against the afternoon sun that poured through the screen. A man stood there, a duffel bag and leather guitar case propped against the porch railing, his hands jammed in the front pockets of a baggy pair of jeans. He stared across the south vineyard toward Fredrickson’s winery.

“Can I help you?” she asked, keeping the screen door closed between them.

He was a stranger but something about his jaw line seemed familiar. His shaggy auburn hair glistened in the sun as though full of burning embers. When he turned to face her, surprise was evident in his expression. “This isn’t Fredrickson’s, is it,” he said. He frowned and glanced down at a map folded in his hand.

“Nope.” Margaret opened the screen to step out on the porch beside him. Harvest time was close and the almost overpowering sweetness of vine-ripened grapes mingled with the man’s musky scent.  His t-shirt was damp with perspiration along the neck and sleeves, and he smelled like Davy did when he came home from playing soccer after school. She glanced over his shoulder but didn’t see a car in the driveway. She pointed across the field where he’d been staring moments before. “Fredrickson’s is on the other side of that vineyard. You’re almost there. Just another half mile down the road.”

He groaned, reluctantly lifted his bags, and slipped the straps over his shoulders.  “Half a mile, huh? Great.” He blew out a breath of frustration. “It’s my own fault. I should have called Billie for a ride, but I thought—hey, this is California, everyone hitches. Darned if I didn’t have to walk the last ten miles. Apparently, folks around here are either leery of hitchhikers or they want to kill them. That was the most dangerous road I’ve ever walked on.”

“You know Billie Fredrickson?” Margaret asked, shielding her eyes from the sun.

He nodded. “Sure. I’ve known her since I was a baby. She’s my sister.” His gaze abruptly left her face and traveled downward with blatant male appreciation, as though suddenly seeing her for the first time. He grinned and whistled through his front teeth. “I am definitely in California. Has anyone ever told you you’re the spitting image of Marilyn Monroe?”

Margaret crossed her arms over her chest. It wasn’t the first time she’d heard a man express appreciation of her resemblance to the Hollywood icon. In fact, in the past year it had been almost commonplace. So much so, that she contemplated dying her hair a dark shade of brown. But this time it didn’t irk her—it angered her. Maybe because he was Billie’s brother, or maybe because he was an immature, scruffy, smelly man, and she’d taken an instant dislike to him. Whatever the case, there wouldn’t be any happy family get-togethers during the holidays if Handel married this jerk’s sister.

“Gee, aren’t you original. Your sister must be so proud.” She snapped the screen open, stepped inside, and let it bang shut behind her before she closed and locked the front door.

“Terrific.” Adam stared at the ancient two-story house. Billie would not be happy. He’d just offended one of her neighbors. Why couldn’t he keep his mouth shut? A curtain fluttered at a side window and that was slammed shut too.

He let his gaze follow the curves and lines of the shuttered house looming before him. It was a pretentious farmer’s shelter to say the least, the windows inset with ornamental framing, three chimneys rising collectively toward the sky, and a center tower that may once have held a bell, but was now enclosed. He shouldn’t be surprised by the inhospitable reaction of the owner. Only a snob would live in a house with a bell tower.

He squinted up at the tower room. It did add an air of mystery to the structure. It probably had great acoustics too. Not to mention, the view from the windows would be amazing with a panorama of the valley and vineyards. He could imagine plugging in his guitar and jamming up there. He shook his head and turned away, retreating down the oak-lined driveway. That was something he’d never experience.

Adam picked up his pace when he heard the sound of an engine roaring to a stop at the end of the driveway. Maybe he could catch a ride. A school bus had pulled onto the shoulder of the road. The door opened. A young boy slowly hopped down the steps, one at a time, as though he had all afternoon.

“Hurry along, Davy. I haven’t got all day.” The driver scratched at his forehead where gray hair poked free of a baseball cap.

The boy took a leap and landed on the ground about five feet from the bus, a backpack clutched in one hand and a soccer ball in the other. He dropped the ball and waved. “Thanks for the ride, Mr. Hadley.”

The driver grunted, pulled the door closed, and shifted into gear.

Adam picked up the dropped ball and bounced it from one thigh to another, tapped it with the side of his foot and sent it back to the boy. The kid dropped his book bag to catch the ball and stared in awe. “Cool!  Are you a professional soccer player?” he asked, blonde hair hanging limply over his forehead and in his eyes. He combed it back with one hand and kicked the ball to Adam.

“Nope, but I played in college.” He deftly kicked the ball up and bounced it from his head and back again. “It takes a lot of practice.”

The boy bounced the ball off his head, but it flew too high and rolled along the driveway toward the house. “Sorry.” He picked up his book bag and started running after the ball, then stopped and looked back. The tip of his tongue stuck out the corner of his mouth. “Hey, what were you doing at my house?” he asked. “Are you a friend of Uncle Handel’s?”

The depth of Adam’s stupidity hit him like a roller derby queen. Not only was Marilyn Monroe his sister’s neighbor, she was also his sister’s boyfriend’s sister. That was a lot of sister problems. He shook his head. “I’m Billie’s brother, Adam. And you are?” he asked, already knowing the answer. The son of the woman who hated him.

“Davy!” his mother called from the front porch, her voice sharp and forceful, not at all like the breathy movie star she resembled.

Adam grinned too. He watched Davy run toward the house and his waiting mom. 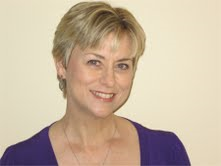 Barbara Ellen Brink is the author of the Fredrickson Winery novels, Entangled and Crushed; the Christian suspense novels, Running Home and Alias Raven Black; Grace Award winning thriller, Split Sense; and the young adult series, The Amish Bloodsuckers Trilogy. She lives in Minnesota with her husband, their two spoiled mutts, Rugby and Willow, and their two adult children living nearby. When she’s not plotting or writing killer dialogue, she enjoys riding her Kawasaki Ninja too fast on winding back highways, watching old movies, and making things with chocolate.

Barnes and Noble (including Nook) http://tiny.cc/yk4wsw

Barnes and Noble (including Nook) http://tiny.cc/0n4wsw