She climbed Ada’s wooden front steps and opened the door.

Smoke filled the living room Ada had turned into a fabric shop. Erica waved a hand in front of tearing eyes. Gray vapors, like swirling fog, partially obscured bolts of fabric stacked against the opposite wall.

“Ada! Ada, answer me please.” Dropping the newspaper, Erica rushed toward the stairs, trampling Bess Truman’s image. “Ada can you hear me?”

Coughing, she grabbed on to the cutting table in the middle of the room, steadied herself, and reached for the phone — no dial tone. Perhaps the fire melted the line.

She yanked the collar of her blouse over her nose and mouth against the smoke. The stairs loomed before her, seeming as impossible to scale as Mount Everest. She lunged forward, gripping the baluster, and thrust herself up two steps. Since Ada wasn’t outside, she had to be upstairs.

As Erica climbed, the smoke thickened and swirled around her. It was darker with each step.

Katrina wanted to throw Detective Daltry into a snow bank. The nerve of him, barging into their house twice in two days, demanding she bundle the baby up and take him into the cold. How could that man not recall their harrowing, nighttime drive through the storm of the decade? She tossed her hair back over her shoulder, and with great difficulty held her tongue.

Momma apparently had no such reservations. “Detective, what you are doing is very wrong.”

Katrina came up beside her mother, to show a united front. “This is outrageous.” Her eyes narrowed and she crossed her arms over her chest. She hated the tone of her voice, but this baby wasn’t a ping-pong ball to be batted back and forth as the detective moved forward with his murder case.

The sportscaster slanted his head toward Argus. “I don’t want to discuss this in front of him.”

“I’m not going anywhere unless Miss Devane asks me to leave.”

Kiera pivoted away from them and pulled her car keys out of her purse. “I don’t give a hoot what either of you do. I’m going home.” She slid behind the wheel of the Pontiac, backed out of her spot, and gunned it out of the lot.

Argus watched her signal light flash a right. She made the turn and her taillights disappeared into the twilight. He laughed aloud.

Argus shook his head and walked to his DeSoto, got in, and put the key in the ignition, but didn’t turn it on. She’d never be mistaken for a Carmelite nun. Not in a million years. Blunt, not soft and feminine like his Ada had been. And where’d Kiera get that short Betty Boop hair-do? Not his style at all. No Sir

I grew up enjoying classic murder mysteries set at Christmas…worshippers bustling to Christmas services while the pastor and his wife are sleuthing around trying to catch a killer. That’s right up my alley…is my cup of tea.

Since then I’ve come to enjoy a supernatural twist here and there as one of the characters turns out to be an angel. Or, the slant is more chick lit with the sleuth running around in four inch stilettos in the snow while a serial killer is on the loose.  And don’t forget the Young Adult Christmas mysteries. They can send a few chills up your spine.

Below is a wonderful variety of Christmas mysteries, romantic suspense, and thrillers.

THE WITCH TREE by Karin Kaufman

Four days before Christmas in Elk Park, Colorado, genealogist Anna Denning discovers a client’s body. When she starts asking questions no one wants answered, she becomes the killer’s next target. Still grieving the death of her husband, Anna must draw on her wounded faith to enter a world of wicca and paganism–reminders of a past she buried long ago–and discover the secret of The Witch Tree.

The first body is found under a trimmed Christmas tree, the second as they ring in the New Year (1947), the third goes head long out a window. Will a young pediatric nurse determined to make it on her own be able to care for an infant whose mother was murdered and escape the killer who has struck again? Can she trust the stalwart village detective with her life and her heart as he works to catch this killer before somebody else dies?

Eddy  Thompson’s hero is John Dillinger, one of the most dangerous bank robbers in  American history. With school out for Christmas, Eddy’s father invites Chet, Rusty, and  their fathers to a cabin he owns on Wolf Lake, Michigan, for ice  fishing, tobogganing, and winter fun. One day, two real bank robbers toss their  stolen cash over Eddy’s fence hoping to come back for it later. Eddy wants to keep it, and that’s when their troubles begin. But the  terror follows them all the way back  home. 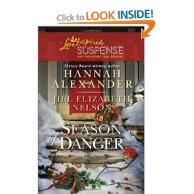 Silent Night, Deadly Night by Hannah Alexander ~ After sabotage strikes the Vance Rescue Mission, volunteer Sean Torrance tries to guarantee the mission a safe Christmas. But can Sean protect Tess Vance when the sabotage becomes poisonous—with Tess as the target?  Mistletoe Mayhem by Jill Elizabeth Nelson ~ Holiday cheer turns chilling in Abbottsville, TN, as danger infects humans and animals. Local vet Kelly Granger knows health inspector Matt Bennett is chasing the wrong target, and will face any danger to show him the truth. Even if working with Matt means risking her life . . . and her heart.

SAFE AND SOUND by Christina Freeburn

While Connor Stratford served in Iraq, his wife Hannah got lost during a blizzard and the mountain claimed her. When a woman’s body was discovered after an explosion, Connor learned her death wasn’t accidental. Now, a man responsible for Hannah’s death is hunting down another woman. To keep the woman safe and draw the murderer to him, Connor offers her shelter in his home. When the woman claims to be his wife Hannah, Connor’s past and present are pulled apart. Is the woman who she claims she is…or is she running a scam with the man who murdered his wife?

From our writing nooks, crannies, and offices — we wish you all a very joyous and merry Christmas

and a healthy, happy, and prosperous

I had the pleasure of sitting on the 2010 INSPY Awards Judging team with Dee in the mystery/romantic suspense/thriller category. It was a lot of fun getting to know her as we read that year’s finaling novels and discussed them before picking a winner.

I was shocked to learn of her passing on October 5th of this year.

Dee had a heart condition and was scheduled to get a pacemaker on October 8th. Unfortunately she collapsed and died before the procedure. She was 39.

Dee wrote jaunty and some might say bodacious multi-cultural romantic suspense as Miranda Parker. Since I come from a public relations background, I enjoyed Dee’s PR savvy, especially in terms of social networking. She instinctively knew that her real and abiding interest in people would come through as she networked to sell her novels. And that’s what made her such a successful internet marketer. She will be missed.

The way anger and outrage are in vogue today, there’s a definite need for professionals to enter the arena. Why at the drop of a hat, or even before the hat hits the ground, somebody’s outraged about it. Anger mongers. They perpetuate and spread anger wherever they go.

But for the average person, why go through all the bother. Hire somebody to do it for you. With all the actors out of work, it shouldn’t be difficult to find a Pompous Outrage Professional (here after referred to as POP). It shouldn’t even be that expensive.

This is the way it would work. Somebody insults my daughter, or I think they did and I know in today’s climate, I should become outraged. But do I really want to expend all that energy? Probably not. So, I do a Google search for a POP. I want them to stand on my porch and spew forth outrage in such a manner that my entire neighborhood is upset by it. They should pace back and forth with arms waiving and screech, “What she said was an outrage.” I’d also want them to walk down my front steps, then mutter and stamp their feet at the curb. Meanwhile, I’d settle in with a glass of wine and read a good crime fiction novel.

I’d negotiate the price and probably ask for an hour of outrage. I don’t think I could take much more than that and after an hour my neighbors might lynch me. But this is the season for it. At Christmas people of all ilks and religions tend to get excited by “the spirit” of the holiday and they tend to feel good. That’s why so many killjoys are determined to spew forth outrage. “Take that nativity scene down.”

And it’s not really about religions or even Christianity. They don’t object to Good Friday.  They don’t yell, “Take that man down from the cross immediately!” No, that type of torture sits well with them,  kinda fits their mood. But Christmas is about cheer, and happiness, and good will, and joy. These anger mongers can’t have that. Not for a minute.

They’re also not very good about jokes or casual remarks. They don’t have a good sense of humor. Probably don’t have a sense of humor at all. Don Rickles is lucky he isn’t pursuing his career today. He’d be in the poor house or embroiled in law suits.

I’m really bad about political correctness. By and large, I think it’s silly. Maybe I need to hire a POP to follow me around and be outraged at the things I say on a steady basis. Now, that’s a thought. An outrageous one, but still a thought.