This blog article, “Pantsters” Can Keep Notes–It’s Allowed is part of the John 3:16 Marketing Network Blog Hop from May 7 to May 14. I am giving away a “pdf” copy of both of my novels BURNING HEARTS and GOODBYE to the two best comments left below this article. Don’t forget to leave your email address if you want to win a copy of my novels. I will have an independent party chose the winners..

I’m a pantster…well mostly I’m a pantster. I do keep a running time-line. In my computer files I call it a “plotline.” This is not an outline. As a punster, I’d rather jump off the roof than write an outline. However, after I write a scene or a chapter, I add it to my time-line.

My time-line is quite detailed. It not only tells me what happened in that particular scene or chapter, I’ll also add small details I might want to refer to later. This keeps me from having to read the entire chapter if I want to recall a certain point. For example, my heroine might confide to a subordinate character that she flunked out of college. I’d add that detail to my time-line as a point of reference for when I write a later scene with those two characters.

I write romantic thrillers and I like to keep my reader from figuring out who the killer is until the very end when I reveal the identity. That means leaving plausible clues for a wide variety of red herrings. Each of these clues has to be added to my time-line so that I don’t write something in a later chapter that contracts my “planted clues.” I wish I could give you an example from the second book in my Sanctuary Point series, GOODBYE NOEL, but that would give away too much, and then I’d have to kill you.

As a pantster, I’m always asking the main characters and/or myself, what comes next? What would they logically do next? In this situation what would happen? As a pantster, an outline is certainly verboten! But I’ve found a clever way to get around that. I write a series of bulletins of possible, plausible next scenarios.

I also like to ask, what would my character never in a million years ever be caught doing? I often brainstorm, sky’s-the-limit and, make a list of five things my heroine/hero would not do. Some of the items on the list get pretty wild. Then I pick the most plausible one for my story and put him/her in that situation. Of course, I might have to tweak  it to make it fit my storyline. 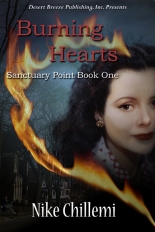 Can a sheltered young seamstress, disillusioned by the horrors of WWII, escape an arsonist/murderer who has killed her employer and mentor, while trying to decide if she can trust the dashing war hero who’s ridden into town on his Harley—who some say is the murderer?

The year is 1947. The bodies keep piling up. Will a young pediatric nurse determined to make it on her own be able to care for an infant whose mother was murdered and escape the killer who has struck again? Can she trust the stalwart village detective with her life and her heart as he works to catch this killer before somebody else dies. Amazon (Including Kindle).

Here’s a complete list of blog hop participants with links to their blogs. Happy blog hopping…