I’m the one to end the 2011 Hot Summer Reads With Edge Summer Blog Tour, sponsored by Edgy Christian Fiction Lovers (Ning). Here it is September and Labor Day’s approaching, but the weather is still mighty hot in many places around the US. No need to let go of that summer reading spirit. Kick back with a wonderful read, recommended by any of the authors participating in the tour this summer. [A link will be provided at the end to see the entire blog tour calendar.]

In the meantime, here are my “hot picks” for great warm weather reading… 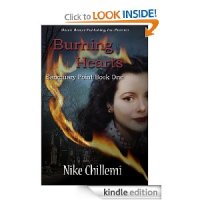 BURNING HEATS, Book One in the Sanctuary Point Series by Nike Chillemi (arson/murder, action, and romance in equal measure)
Can a sheltered young seamstress, disillusioned by the horrors of WWII, escape an arsonist/murderer who has killed her employer and mentor, while trying to decide if she can trust the dashing war hero who’s ridden into town on his Harley—who some say is the murderer?
Erica Brogna’s parents doted on her and taught her to think for herself. Many boys she grew up with have fallen in the war, shaking her childhood faith. In rides a handsome stranger, at the hour of her most desperate need. A woman who is her best friend and mentor is trapped in a burning house. After making an unsuccessful rescue attempt, Erica stands by as this man rushes into the inferno and carries her friend’s lifeless body out.
Lorne Kincade can’t out run his past on his Harley Davidson WLA, the civilian model of the motorcycle he rode in the war. He’s tried. He’s been a vagabond biker in the year since the war ended. His Uncle Ivar bequeathed him a ramshackle cottage in Sanctuary Point, on the Great South Bay of Long Island, NY and now he’d like to hope for a future again, repair the miniscule place, and settle down. The only problem is, a young woman with hair the color of mink is starting to get under his skin and that’s the last thing he needs.
http://www.amazon.com/Sanctuary-Point-Book-One-ebook/dp/B0050PJSTY/ref=ntt_at_ep_dpt_1

REVENGE, the Travis Mays series by Mark Young
When a trained killer threatens ex-cop Travis Mays — and those Travis loves — he finds a skilled adversary and an unexpected fight.
After a high stakes gamble ends in personal tragedy, Travis walks away from years of training and a highly successful law enforcement careet. Determined never to look back, he starts a new life and a new career teaching criminology at the university and building a cabin in the idyllic Idaho mountains. He hires a beautiful river guide, Jessie White Eagle from the Nez Perce trive, to guide him safely down the Lochsa. The turbulence of the whitewater, however, is just the beginning of his troubles. Travis finds himself in the crosshairs of a killer — calling himself Creasy — bent on revenge.
This fast-paced thriller takes readers on a wild ride down Idaho’s white water rivers, along the historic Lolo Trails once tread by the Nez Perce nation, and onto the city streets of California. Tighten your helmet. This ride never stops until the last shot is fired and the final body falls.
http://www.amazon.com/Revenge-Travis-Mays-Novel-ebook/dp/B004NIFD0C/ref=sr_1_1?s=books&ie=UTF8&qid=1314739943&sr=1-1

Disc jockey Carter “The Cart-Man” Jackson has been climbing the stairway to heaven,


keeping his life as simple as possible by living from one song to the next. He had the world by the tail, coming from a family of power, prestige, and politics — until he let it all go.
Killer Queen is burning up the highways to hell, terrorizing a town in her crimson stilettos, by holding random men at gunpoint. She had nothing except a dad who abused her, and now she has nothing to lose.
K-I-L-L FM 100 is the visual soundtrack of two opposing lives colliding head-on at a destined radio station. As Killer Queen put the DJ under the gun during his night shift, she begins to question who the real hostage is, as she confronts the demons of her past. And as the DJ shines his light into her darkened world, a few shadows of his own begin to loom from his closet.
When the lane narrows on this solitary stretch of highway, both captor and captive realize that something’s got to give. Someone’s got to go. Closing in fast on this dead-end drive, two souls discover that their lives are not so different. Each has lived under a mask and each is in dire need of genuine love.
A full-throttle storyline, injected with one of the most unique twists ever unleashed. K-I-L-L 100 is the thriller that reads like a soundtrack. There’s a time for everything under heaven. Killer Queen knows there’s a time to kill.

THE CLOUDS ROLL AWAY, the Raleigh Harmon series by Sibella Giorello

Closing her assignment with the FBI’s Seattle office, a forensic geologist Raleigh Harmon returns to her hometown of Richmond, Virginia expecting a warm welcome. Instead she finds herself investigating an ugly cross burning at a celebrity’s mansion and standing in the crosshairs of her boss at the Bureau. And the deeper Raleigh digs into the case, the murkier the water becomes — until she’s left wondering who the read victims might be.
To make matters worse, Raleigh’s personal life offers almost zero clarity. Her former confidant is suddenly remote while her former boyfriend keeps popping up wherever she goes. And then there’s her mother, Raleigh’s move home was supposed to improve Nadine’s fragile sanity, but instead seems to be making things worse.
As the threads of the case begin crossing and double-crossing, Raleigh is forced to rely on her forensic skills, her faith, and the fervent hope that a breakthrough will come, bringing it that singular moment when the clouds roll away and everything finally makes sense.
http://www.amazon.com/Clouds-Roll-Away-Raleigh-Harmon/dp/B004J8I01K/ref=sr_1_1?s=books&ie=UTF8&qid=1314739727&sr=1-1#_ 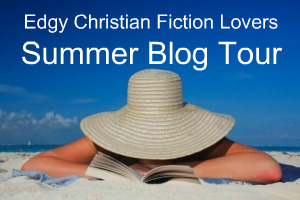 4 thoughts on “Hot Picks For End Of The Summer Reading”