I went to carmel-colored hair and a new cut. I did the color from a Clairol box and hubby’s cousin Mona did the cut.I had been thinking the blond, which I had before would cover the emerging gray, but it just wasn’t spunky enough.

Anyone who knows me knows I’m the original “spunkette.”

Also, the darker carmel shade makes my face look thinner. Always a plus! 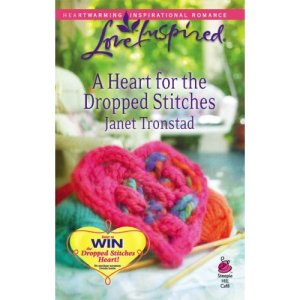 In Janet Tronstad’s A Heart for the Dropped Stitches (Steeple Hill) Becca is the featured heroine from the series’ cancer survivor’s support group and she’s falling in love with one of southern California’s most eligible bachelors. Becca calls herself the “tin man” because she never shows emotion, so will she let romance blossom? Janet has crafted another touching volume that keeps the reader turning pages.

Love Stories From The Bible (Bible.com)

Susan May Warren faces the cutting edge of global evil in her suspense novel, Wiser than Serpents (Steeple Hill). Russian FSB agent Yanna Andrevka goes under cover without back up to find her sister who thought she was becoming a mail-order bride going to America, but instead was swallowed up by an international slave trade cartel. Yanna can usually rely on her long time friend and secret love American Delta Force captain (military undercover operative) David Curtiss, but he’s nowhere to be found. She assumes he’s doing something dangerous in deep cover. She’s so right on that one. When she’s captured, as is her plan, by the same trafficers who took her sister, David finds her with a gun to her head. He must blow his cover in an operation that took months to set up to take down the Twin Dragons (involved in drugs, arms, and forced prostitution).
Yanna is an FSB (the made over KGB) IT expert, not a field operative, so she makes plenty of tactical blunders during the course of the story. However she doesn’t always need David to save her, nor is she always appreciative of his efforts or his fear for her safety. The horrors of human trafficing are not gruesomely described, but neither are they glossed over. Although this is definitely a stand alone book, Warren constructs a plot with many twists and turns, bringing characters from former books in this Mission Russia series. Sparks fly as Yanna and David try to achieve their seperate agendas, sometimes endangering each other, sometimes rescuing each other, always dealing with the chemistry they feel for each other. David has a monumental struggle trying to handle his deep love for Yanna, as he will not allow himself to be unequally yoked in marriage. This is a compelling story of unrequited love amidst a thrilling adventure frought with danger, some of it brought on by the character flaws of the two main characters. It’s a really good Christian romantic suspense read.

Michael Connelly’s The Last Coyote is depressing yet optimistic at the same time. Tough, smart, to-the-point LAPD homicide detective Harry Bosch is on the edge. His girlfriend left him, his house has been condemned after being ruined in an earthquake, and the department forced him to temporarily return his detective’s badge while undergoing therapy for attacking his commanding officer.
Now suspended pending the outcome of his psychiatric evaluation, he becomes obsessed with investigating a 30 year old cold case: the brutal slaying of an LA call girl who happened to be his own mother. Harry lives by a code: either everyone counts or nobody counts and he applies this code vehemently to solving this very personal case and soon discovers he may be ruffling some feathers among the high and mighty. He spots a lone coyote near his condemned house who seems bewildered, lost and confused and identifies strongly with the animal. He wonders if it is the last one to survive up in the hills above LA after the earthquake. Then he wonders if he’s a lone relic of a LAPD that doesn’t exist any more…from a time before everything in the department was computerized and when most cops didn’t moon light in jobs like selling real estate on the side. Harry descends into realms of personal darkness in this book, but also rises above himself with compassion.Connelly is a master of twists and turns in his plotlines. This one has a murderer I don’t think anyone will guess until the very end.

Christian girls are targeted in Carol Steward’s Badge of Honor (Steeple Hill). Former detective Nick Matthews is forced to return to duty as a uniformed police officer after charges against him that he was on the take proved false. But he still feels eyes on him in the locker room. Not everyone’s suspicion has been quelled. Then in walks former FBI agent Sarah Roberts and Nick’s informed she’s joined the local force and will be his partner. He’s going to have to train her, but thinks it’s just another sneaky way for the department to keep an eye on him. What’s worse she used to go to the local high school before she took off for college, and he had a huge crush on her then. Now someone is targeting girls at the local college who are in a Christian club and are committed to chastity. The problem is Sarah’s sister could be the next target. This is a well written book with plenty of red herrings to satisfy.

Chilling evil is brought out of the darkness in Steve Hamilton’s Night Work. Joe Trumble, a juvenile probation officer, finally decides he’s ready to accept a blind date two years after his fiance Laurel’s brutal murder. At first he gets cold feet and almost stands his date up, but then thinks better of it and is surprised at how well the evening goes. Then he learns the next day the woman was strangled to death. The local police chief brings in two state detectives and one of them makes Joe his prime suspect when two more women who Joe knew are murdered. Joe quickly realizes he’s being followed and set up, but he hasn’t a clue why. So, he begins his own investigation to trap this psychopathic killer and to clear his name.
I like Joe. He’s a loner living in an unkempt apartment above a boxing gym. A physically strong man who boxes at the gym below his apartment, he’s been emotionally laid low by the murder of his fiance. Yet he can open his heart to become something of a guidance counselor to the juvenile offenders he sees as a probation officer.
As the state police start to close in on him, Joe widens his search and is out in the field without backup. Never a good idea. He soon finds himself in the clutches of a maniac who utterly hates him. A fascinating read.