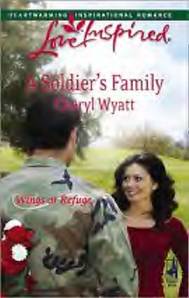 “A Soldier’s Family” by Cheryl Wyatt
The thing I love most about “A Soldier’s Family” is that while it’s fiction that uplifts and inspires in a spiritual way, it’s also got a real edge to it. I love that the hero, Manny Pena, not only gets a second chance at life, but also gets a second chance at a family, and a second chance to restore the military career he so loves. You see, his small son drowned and then his wife, in deep grief overdosed, but the God Manny’s come to serve gives him another shot at having a family. Manny has always blamed himself for his son’s death, and the idea that God doesn’t blame him is a very new concept to him.
Manny, who’s built like a Sherman Tank, is a military parachute jumper, he jumps out of planes, into the sky and falls to earth to rescue people. The book opens when in mid air, Manny’s having serious trouble with his chute. Manny’s tough, but after free falling about 1000 feet and hitting a tree, he’s in a world of hurtin. While in physical therapy rehab, he befriends the fiery Celia and her troubled teenage son Javier. I loved the scene where Manny is at dinner in Celia’s house and catches his eyes taking in how flattering Celia’s dress is and how her high heels show off her calf and how the earrings are totally captivating him as they brush her neck. As a single Christian man in love, he’s now struggling with both his emotions and his physical attraction. The scene is handled in an appropriate way spiritually for a Christian work of fiction, and it’s also handled in an age appropriate way. Manny and Celia are both mature people and there is a teenage boy they’ve got to set an example for. This book is wonderful on so many levels. I highly recommend it!!!
ISBN: 037387474X
Publisher: Steeple Hill
Ordering Link: Order now!